Grumpy here. Still not equipped with my radiocarpal communication device. Want to finish my thoughts on the decline of Western civilization and civility through the metaphor and reality of the texting phenomenon. Hang in there: gotta unpack this stuff carefully, as if my cognitive knapsack was stuffed with softshell turtle eggs. 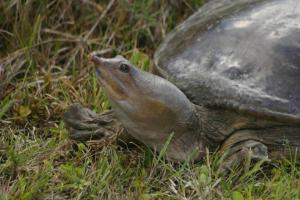 Yep, this is what I have instead of a cat.

Ok. So I was at my son’s ball hockey game the other day. Here’s what I saw: 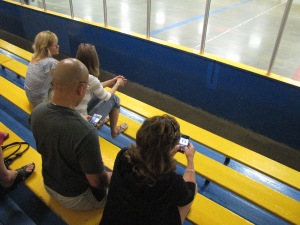 Later, I hit the Stone Crock Inn over in St. Jacob’s for some food that really schmecked. Used my Leica to snap this crew waiting for some take-out pig tails:

You’re starting to get the picture, right? As MIT media theorist Sherry Turkle says, “alone together” is our new communal posture. Sherry drank the koolaid when the online experience came along back in the ’90s, going all ga-ga over life on and in the screen. The forging of new identities, new communities, the liberating potential of cyberspace, and all that jazz. Sherry was pumped. Now, twenty years in to the brave new world, she has kinda belatedly figured out what anybody who was paying attention already knew: that life, love, and interconnection carried out in virtual worlds takes an awful lot of time away from their real-world equivalents. The medium is the message, as that old Canadian maître, Marshall McLuhan, put it in his blog…er…book, Understanding Media. It’s not the content of a medium that matters but the medium itself, what it does to your body and mind. If you want a good picture of how this works, just think about a kid spending five hours a day playing video games. Doesn’t matter what the video game is: you name it, Super Mario or Grand Theft Auto. Point is he’s down in the basement in the dark moving a blob around on a screen; he’s not outside catching frogs or playing scrub with his chums. His mind is being formatted for computer logic trees; his body is being shaped for Swedish office furniture. A few years of this and you get the following result: 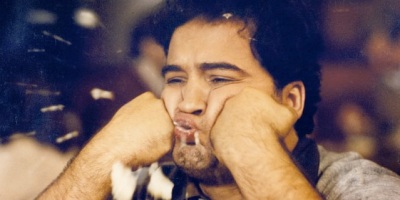 Anyhoo, seems like the call of the remote trumps the immediacy of the shared, lived experience way too often. Texting is helping mold us into arms-length companions; our relationships are becoming superficial, loosely connected, and easily trashed. When the inbox dings, the devotee of the Church of BBM responds like Pavlov’s dog: father, mother, sister, brother, friend, colleague, boss, underling, all go under the bus as the crackberryist reaches out and swipes in the message from afar. The text chatter begins, and the residual f2f devolves into grunts and false affirmations. You know what I mean, because you yourself have feigned a conversation while you’re reading or writing a text message, don’t you lie to me: “Uh-huh?” “Yep.” “Is that right?” “Sounds interesting.” That’s what we call “phatic communication,” basically just noises you make with your mouth to signal to the person you’re nominally with that you indeed have a pulse. Meanwhile, you’re busily typing the extremely urgent communique back to the remote interlocutor, who was too lazy to come and see you personally but by virtue of his non-presence is somehow more fascinating than the living creature across from you: “I am @ lnch. Lets meat @ 2 @ Starbuks 4 coffee. How about them Leafs?”” And when you hie thee over to Starbucks at two, you will in turn field all the texts you’re getting from work as you fake a new unengaging conversation with the latest warm body, who is anyway multitasking on his own Android. 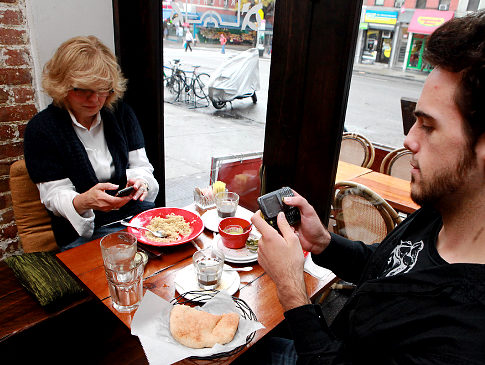 Now, some of you are going to say that what alone-together really means is that there was already a huge hole in our so-called holy communion. Why else would we so quickly attend to the far if the near was brilliant and complete in the first place? The text rushes into that ragged opening like a tornado to a low-pressure zone over Kansas. As we arrange our bodies across a table, what we imagined was to be a meeting of minds turns out to be two chunks of Swiss cheese passing in the moonless night. Text messages, in this view, make up for the fundamental poverty of interpersonal communication; they are the dangerous supplement that is not really a supplement at all but a welcome relief from the meagreness of our mostly vacuous common experience.

I hear you. (I’m actually listening to you; I’m not checking my email. Honest.) I know you are world-weary and you’ve seen it all before and you’re also bored and you prefer grins to grumpiness and you don’t need me in your ear and you’re receiving a text anyway. You have teenagers; you have a busy life; there is stuff you have to do. The world is demanding; it claims our attention. You say that texting is wonderfully efficient. It lets you control your communications. It gets you quickly to the gist of things, to those hard kernels that tingle with cosmic significance: “When are picking me up?” “Check out this on youtube” “I’m sooooo bored.” Moreover, you tell me that people have always griped about new modes of communication. You say that sometimes we never know how technology is going to be used in advance, so that it’s dumb to get riled up about how things play out. Water finds its level; texting will, too. It is the circle of life, Simba, relax and eat your antelope. 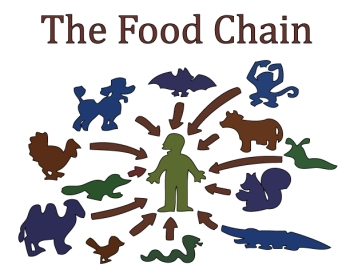 Tools get proved on the ground, you philosophize, your thoughts growing expansive as you put aside your phone and remember how to construct an argument. “Humans will use them in ways that suit their needs. That’s Progress…no, that’s Evolution! We are as the trees and the stars, Grumpy, and we have a right to be–and to text! You can’t stop the future from coming! Get on the train or get out of the way: no matter what, it’s coming!  And it’s more wonderfully strange than you in your flimsy house of cynicism can dream of! Why, didn’t Thomas Edison invent the gramophone in the 1870s because he thought people would need to record telephone conversations? Gee, what would happen if the farmer’s wife down the road on the party line gave her friend a recipe for peach cobbler but the friend forgot the list of ingredients? Thanks, Thomas, for this wax cylinder that helpfully recorded those evanescent words for all time. Ah, yes, here it is: two cups of brown sugar.” 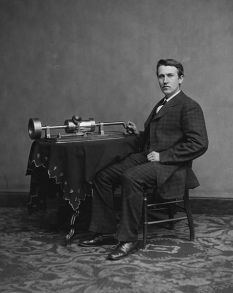 C’mon, you say (getting all indignant now, impatient with my dopey Luddism), we text because it serves a need, a lack; it improves our lives, for crying out loud! “You can fight reality all you want, but people vote with their feet–and their fingers. Don’t mistake your heat for our light, Grumpy, thinking you can scold us into ditching our tools or using them according to some fussy etiquette. That’s for History to determine. As Eddie Murphy told us back when he was still amusing, ‘White men stole George Washington Carver’s recipe for peanut butter, copyrighted it, and reaped untold fortunes from it, while Dr. Carver died penniless and insane, still trying to play a phonograph record with a peanut.’ Q.E.D., blockhead!” you shout. ‘Nuff said. 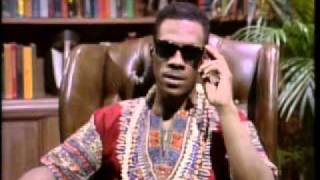 OK. You’ve made your point, dear reader. I’m in the way of techno-destiny. I get it. But relent a bit, willya? Can I respond?

Thanks. Now, I don’t exactly understand what Eddie Murphy has to do with this, but I appreciate your vigor if not your rigor. You speak with the passion of the convert. But, alas, you couldn’t be more wrong. You’ve made the error that all non-grumpy academics make, and that is to confuse what you love with what is good for you. A lot of people love butter though it hardens their arteries. A lot of people love Tom Cruise though he hastens dementia. And a lot people love texting though it contributes to the demise of civility. Yet all too quickly we forgive the things we love of their unforgivable faults. In fact, we often don’t see them as even possessing faults. We adore our ugly babies. Maybe love is really just lack of taste elevated to virtue. Keep in mind that humanity is a self-flattering species: we have a hard time looking in the mirror and not seeing the fairest of them all. We gaze down at what we have wrought and see that it is good, darn good. How could it not be? After all, it’s a little piece of us. 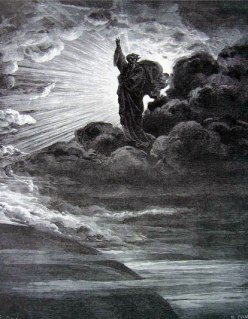 And Man, looking on the smartphone, saw that it was totally awesome.

So here’s what you must do to help save civilization from itself. The next time you are having a nice talk with your friend Joyce, and she even so much as flinches when her mobile device buzzes her about an incoming text, politely rip the device from her hand, place it carefully on the ground, slide the ball-peen hammer from your purse where you previously stowed it, take four or five practice swings, then with all the main-force you can muster, obliterate this devil’s device into its component molecules. Don’t worry about Joyce’s reaction: just tell her it’s for her own good and that eventually she’ll understand. (The thing was probably free anyway–they get you on the plan minutes.) 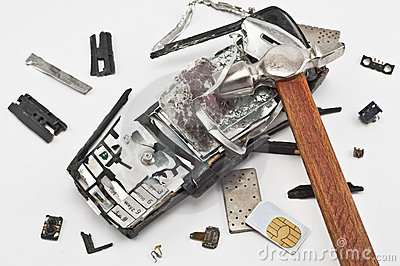 Then say, “Now Joyce, where were we? I think you were telling me about Bob’s new grapefruit diet…”

Got it? Can you make this happen for me? Remember, I’m counting on you. And think of what you will have accomplished. Now you and Joyce can finally have a nice chat in the here and now. Won’t you feel better? And, thanks to you, won’t we, all of us, be just a little closer to finding our humanity again?

First apologies to subscribers who thought they already got this post. Here it is in its entirety.

What do English professors do in the research part of their academic lives? Many, many things, and over the next few posts I’m going to profile some of my colleagues’ research projects.

Professor Marcel O’Gorman’s work crosses the borders of art/theory/rhetoric/digital media. Some of you will know him as the founder and Director of the Critical Media Lab and/or as a much-admired professor who teaches a variety of courses in the English department. But he’s also an artist, and one of his recent creations is on tour.

O’Gorman won the Gamble Award to finance his exploration of the “myth” surrounding famed Canadian painter Tom Thomson and his death on Canoe Lake. He made a 16 foot “ghost canoe” that “revisits the myth of Tom Thomson through the lens of this canoe-man cyborg, producing an electronic sculptural object that is at once tactile and ethereal; an evocative object that technologically refashions the themes of solitude, mystery, and sublimity found both in Thomson’s painting and in cyberculture.”

After months of residence at THEMUSEUM in downtown Kitchener, the ghost canoe travelled to the Tom Thomson Gallery in Owen Sound and is now on display at the Rails End Gallery in Haliburton, Ontario. Read a review of the exhibition published in The Haliburton Echo. 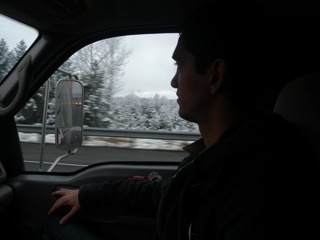 Driving the canoe in a U-Haul from Owen Sound to Haliburton, Pouya at the wheel. 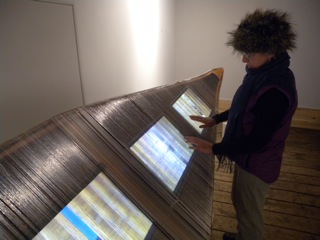 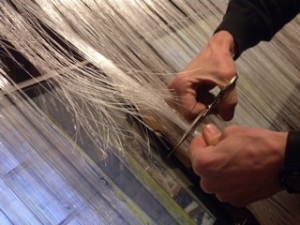 Revisit the making of the ghost canoe by reading Dr. O’Gorman’s project blog, Myth of the Steersman. (Remember you have to scroll through the archives if you want to read from first to most recent post.)

I LOVE the idea of the canoe being portaged around and eventually re-dipped in Canoe Lake. What do you think? Did you know that English professors do such uber-cool things in their research time?