Not everyone got to attend the recent “English + Innovation” and Critical Media Lab’s “Graduate XDM Exhibition” events. If you didn’t, and are curious about how some of our English students manage to marry technology, literary study, and media, you’ll want to check out this excellent guest post from PhD candidate Philip Miletic and Stephen Trothen, an alumnus of UWaterloo’s English MA program. Enjoy!–JLH

The Making of “Everybody’s Everybody’s Autobiography”: Critically imagining Stein, Radio, and the Modernist Soundscape
By Philip Miletic and Stephen Trothen

Introduction
In April at the Critical Media Lab’s “Graduate XDM Exhibition” and in June at the “English + Innovation” event, we featured our radio installation, “Everybody’s Everybody’s Autobiography,” which aims to illuminate the imaginative and ethical encounters of radio in Gertrude Stein’s 1937 Everybody’s Autobiography. The installation remediates Everybody’s Autobiography  as a multivocal, dynamic “radio text,” creatively imagining how Stein incorporates the aural/oral quality of radio into practices of listening and speaking in her own writing of the book. We retrofitted a 1931 Philco radio to play audio recordings of collaborators each reading a selected chapter. Participants at the installation can tune into a choice of eight “book stations” by turning the dial on the radio. Each “book station” is comprised of six chapters read by six separate collaborators. Above is a video demonstrating the radio installation.

The video, even at an hour long, can only show a small slice of the project and of all the voices that come in and out. But we hope this gives a glimpse of the different tonalities, inflections, giggles, sighs, sore throats, pronounciations, and struggles. “Everybody’s Everybody’s Autobiography” is for Philip’s dissertation chapter on Everybody’s Autobiography. The idea for the radio installation formed when encountering the lack of research on Stein and radio in contrast to the amount of research on her (mostly male) contemporaries. There was also the research problem/question of how do we foreground radio as a formal model in her writing. “Everybody’s Everybody’s Autobiography” was the solution.  If Stein felt that she was filled with everybody while on the air, then we had to fill the text with everybody.

Both the process and the product of the radio installation was a creative and imaginative exercise to critically engage with the relationship between Stein and radio and the Modernist soundscape. But what we didn’t expect was the ways “Everybody’s Everybody’s Autobiography” demanded us to go out of our comfort zones: asking people to read and record themselves for an extended period of time; finding a place that sold old radios and then retrofitting one; using the wood and metal shop on campus; and the trial and error of programming. Research can be, at times, very isolating and removed from others. But this project gave us the very opposite of that.

Retrofitting the Radio/Recording Collaborators and Programming
The radio was purchased from a small vintage radio repair shop in downtown Kitchener named Merry Melodies. We were after a radio from the early 1930s to pair with the book , and began looking through the small but densely populated store. 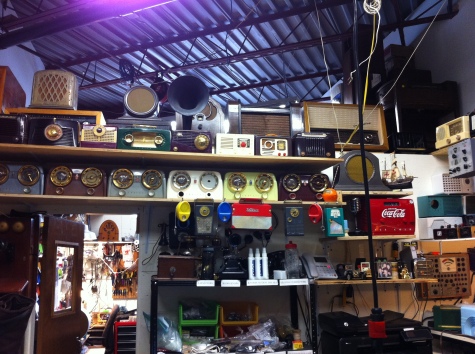 We spotted what appeared to be a pretty old model on a high shelf. According to the owner, this particular radio – the one we ended up purchasing – was the oldest radio in the shop (a 1931 Philco). The radio was completely non-functioning when we purchased it, with a severed power cable, no speaker, and a number of missing tubes and components. Of course, this was perfect for our purposes and perhaps a bit confusing to the shop owner. Although the Philco radio may not have been encountered, its “cathedral” style shape was a popular aesthetic at the time and Stein would’ve likely encountered a model similar to our radio in the 1930s.

The next step was getting readers to read chapters from the book. The process was both easy and difficult. Whereas it was easy to recruit anyone to record the first couple of chapters or the last chapter, it was very difficult to find someone committed to reading Chapter 3 and Chapter 4 because it took approximately three hours and six hours to read respectively. But most of those who did record those long chapters recorded at home and in parts (twenty minutes a day or so). For other recordings, we held recording sessions that collaborators attended, or we set up recording appointments when our schedule didn’t quite match theirs. The recording devices were inconsistent––iphones, android phones, macbooks, podcast mic, regular mic––which created an inconsistent quality between recordings. This risky approach to recording, however, produced a very nice effect: some recordings sound “further away” or have a “weaker signal” than others, giving the recordings a radio feel.

The program we used for these collected audio recordings was written in the Max/MSP language. We managed the collected audio recordings of the 28 readers in order to play them back across 8 different channels. The three knobs of the radio are used to turn the program on or off, adjust the volume, and tune in to different “book stations.” The project is designed to operate as a traditional radio without having to broadcast signals. To add to this aesthetic choice, we also made static recordings from an old handheld radio that we used to swell in and out between channels or readers. So, if a listener were to stay on one channel they would hear the entirety of the book with a new reader taking over after every chapter.

The built of the radio introduced an exercise in attempting to pair together electronics that spanned almost a century. In order to retrofit the radio, we had to remove a number of the internal components, some of which we wished to keep but couldn’t 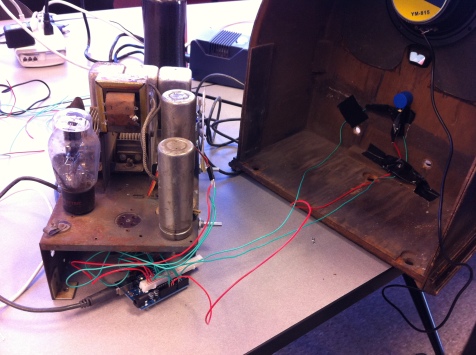 As a result, we took many trips to several custom electronics shops and paid multiple visits to the wood shop in East Campus to adjust and re-adjust the radio so that the old and new parts would work in tandem. This enabled us to discreetly hide the custom electronics, knobs, and other components we needed to have the computer and radio communicating with one another. Once we started pulling apart the radio, it was fascinating to see the internal – and messy – workings and to begin infusing it with modern electronics. Although we took a digital approach to the project, the organization of the actual program was not unlike the complexity of the radio’s wires. 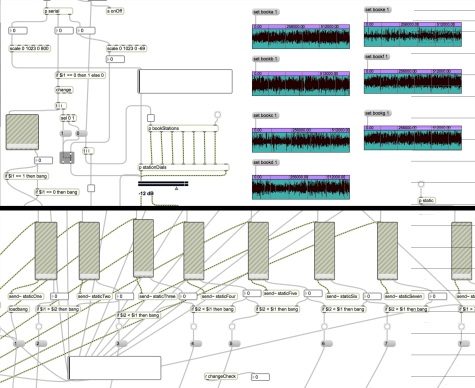 We wanted to ensure that the modern technology we were using didn’t necessarily erase the materiality of the radio and its components (wires and all). This digital approach is a hidden one on the surface, but the depth of the programming reveals a very complicated and sensitive structure that required a lot of tinkering and re-tinkering to get the radio to work (similar to working on a fully functioning radio). Once the infrastructure of the radio was created, the program allowed for some unique characteristics through its digitization – such as non-repetitive ways of sequencing chapters, and the ability to adjust the program based on environmental considerations.

Conclusion
“No problem, it was fun.” We were caught off guard when a lot of collaborators said these very words to us after we thanked them for reading. Even those who read for a total of 5-6 hours said this. The word “fun” isn’t normally encountered when people mention Stein, some people even responding as if Stein offends them. So it was refreshing and wonderful to hear that all collaborators found something that interested them or that they loved, even if some of them wouldn’t necessarily read her again.

In Karin Cope’s Passionate Collaboration, she argues that reading Stein is a passionate collaboration, granting the reader agency. Juliana Spahr argue that Stein’s work decenters the author and lets readers co-author the text. And Harriet Chessman describes reading Stein as a dance that readers are invited to. All of the collaborators, without knowing what these scholars have said, drew attention to this. They noted that they “found their rhythm,” “imposed” their own punctuation, feeling that Stein “left it up to the reader to decide how they wanted to read each sentence.”

And so we would like to thank all the collaborators and everybody else that was involved in the making of “Everybody’s Everybody’s Autobiography.” However, we would like to add that the project will never be “finished.” We are always open to adding more collaborators to the “aether” of the radio installation. As much as “Everybody’s Everybody’s Autobiography” is by Philip Miletic and Stephen Trothen, the radio itself––just as Stein’s text does––decenters the authorial presence as soon as the radio clicks on and the sound of everybody rushes in.

This entry was posted in Alumni, Events, Graduate students, Research. Bookmark the permalink.